Bereavement Notice – Jose Carlos Miramontes born August 27, 1941 in Azusa California, passed away peacefully on Tuesday, October 6th, in Chino Hills California, at the age of 74.  He is survived by his loving wife Sandra Miramontes.

Our prayers and deepest sympathy go out to him and his family. His presence and contributions to the community and the NLPOA will be missed.

US Senator Martinez from Florida and Jose C. Miramontes (NLPOA Past National President)

Jose C. Miramontes (NLPOA Past National President) was an interview by Uni-vision (On the behalf of Felipe Ortiz, NLPOA National President), prior before the Presidential Inauguration in Washington DC. Also included, Mayor Ernest D. Davis of Mt. Vernon New York.

2003 NLPOA Spring Meeting in Milwaukee WI
NLPOA Board of Directors 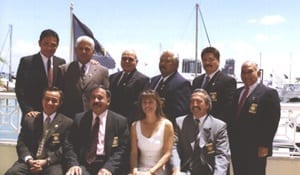